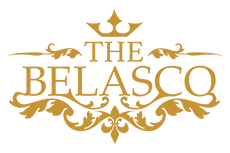 In the heart of downtown Los Angeles resides an unparalleled host of rediscovered historic theaters—and The Belasco is LA’s newest “old” gem to be lovingly restored. Transporting modern Angelenos to another time, the theatre’s rich and diverse history is evident to anyone who steps through its storied doors.

Frederic and Edward Belasco first founded the original theater in 1904, naming the eponymous theatre for their more famous brother, David. Housed at 337 S. Main Street, the 1200-seat theatre featured a stage spanning 70 ft. wide and 38 ft. deep. Once construction was finally completed in 1926, the theatre was renamed the Follies and became a popular burlesque destination. Its opening night on November 11, 1926 featured the play “Gentlemen Prefer Blondes”—the first of many to grace The Belasco stage along with stars like Humphrey Bogart and Helen Hayes.

Designed by architects Morgan, Walls & Clements, the then-new construction was a six-story reinforced concrete structure showcasing exquisite attention to detail. Its cast stone decorations display an unforgettable fusion of Churrigueresque, Spanish Renaissance, Moorish, and Gothic details. Most of the building’s amazing detail has survived well to this day, including the striking dome ceiling.

During the 1930s, Belasco Theater participated in The Federal Theater Project (FTP). The FTP was a New Deal project to fund theatre and performing arts in the United States during the Great Depression. It was considered one of five Federal One projects sponsored by the Works Projects Administration (WPA). The FTP’s primary goal was employment of out-of-work artists, writers, and directors, with the secondary aim of entertaining poor families and creating relevant art.

The 40s were a time of transition and struggle for The Belasco. The theatre briefly shuttered in 1945, and was then reopened by Arthur Grossman. During this decade, it is thought that The Belasco was likely used mainly as a burlesque venue.

The 1950’s brought forth a major change, since the building was bought by the Immanuel Gospel Temple. It was then converted into a church, with the dedication services held on June 11, 1950. Signage from this era of the theatre’s life can still be found facing 11th Street. Along the front side of the building is a large sign stating, “Prayer changes things”; on the rear exterior is a smaller but still intact sign reading “Immanuel Gospel Temple.”

Since then, the theater has been available on a rental basis for movies, television shows, and private parties. On May 11, 2004, Sony Computer Entertainment America (SCEA) rented The Belasco for a star-studded event and release party, The Playstation 2 Underworld. Many movies have also been filmed on location at The Belasco, including Swordfish with John Travolta, Memoirs of a Geisha, and The Illusionist with Edward Norton.

In March 2011, The Belasco unveiled a grand $12 million restoration more than 20 years in the making. At 40,000 sq. ft., the modern reimagining of The Belasco features a main theatre, ballroom, basement lounge, wine/tapas bar, and two restaurants.

Today the history and positioning of The Belasco is both similar to and different from the Broadway movie palaces. Much like the Broadway venues, this amazing building is now finding new life in the 21st century. On the positive side, The Belasco is in much better original shape than many of the Broadway edifices.

The Belasco looks forward to adding many more chapters to its already colorful history!

Sign up for our newsletter!
SIGN UP »
VISIT OTHER HOUSE OF BLUES
& LIVE NATION CLUBS AND THEATRES